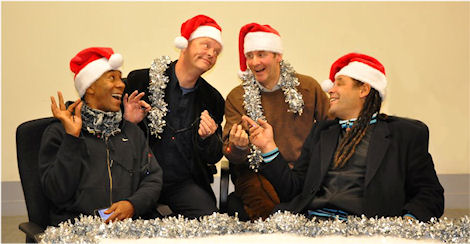 Ran across a brilliant piece which combines one of my favorite series with one of my favorite times of the year. Searching half the night trying to find the appropriate person to attribute this to and give credit where credit is due, all I could come up with was that it looks like it was brilliantly penned a decade or so ago around Christmas time by ‘kronette‘ and placed on a Beta site called Archive of Our Own. All I can say is, kronette, wherever you are, this is a genius piece of work.

‘Twas the night before Christmas, and all through the ship
There was nothing on scanners, not even a blip
Kryten was bustling to spit-polish and shine
Every inch of Red Dwarf, from deck 4,000 to nine.

Rimmer was crashed out all snug in his bunk,
Twelve whiskey sour balls curing his holiday funk
Lister soon followed with marijuana gin
Thumb in his mouth and drool on his chin.

Cat strutted his stuff on the dance floor with glee,
While disco lights bounced off the (fake-arsed) green tree.
Stacks of presents underneath leaned dangerously right,
But Kryten’s new mop handle hindered their flight.

While alarm sirens blared through the whole of the ship,
“Just three minutes more,” a snoozing Rimmer did quip,
“Whassat?” Lister slurred and half fell from his bunk
Crying out in pain and cradling his junk.

As Kryten rushed in, Lister was curled on the floor,
Tears filling his eyes and looking quite pale and poor.
Kryten flailed about exclaiming, “What on Earth is the matter?”
Lister said in a high-pitched voice, “Cracked me love spuds on the ladder.”

Kryten helped Lister to bed, then fretted about,
“We’ll all soon be dead!” he wailed with a shout.
Sweat on his brow, Lister grumbled a threat,
“If you’re wrong about this, I’ll beat your smegging head.”

Rimmer awoke with a groan and a sneer,
“Kryten, are you telling us Father Christmas is here?”
Kryten glared at him sharply, “I don’t know who you mean.
I’m only reporting facts as they’re shown on the screen.”

Lister’s eyes widened comically, “You can’t be serious, Krytes.
The big man, the main man, on Christmas night!
He brings presents to all who’ve been good rather than bad.
He brought me my first guitar; it was totally rad!”

“That’s a lie,” Rimmer piped up, dampening Lister’s good cheer,
“Aged nine, no skates and I’d been good all damn year.”
“Yeah, but Rimmer,” Lister said, his eyes all a-twinkle,
“You’re a twonk who doesn’t even believe in Kris Kringle.”

“That’s besides the point!” Rimmer huffed and tried not to care.
“He should lob presents at everyone good or bad, to be fair.”
“That’s not how it works,” Lister tried to employ sane reason.
“You’re supposed to care for your fellow man this season.”

Kryten implored, “I believe there are more pressing matters at hand,
Like which landing bay to tell the gentleman to land.”
Rimmer smirked with arms crossed, “He’s not coming aboard this ship.”
Lister flicked him off with a curt but firm, “Shut it, ya twit.”

They sped to the docks, meeting up with Cat on the way,
And stared in amazement at eight reindeer and one sleigh.
“It really is Santa!” Lister proclaimed, eyes starting to glisten.
Cat sidled up to him and asked, “Bud, who is this person?”

“It’s Father Christmas,” Lister sang, full of cheer and great glee.
“And he’s come to give presents to all of yous and me.”
“He’s giving presents?” exclaimed Cat, perking up with eyes alight.
“Dearest Cat,” Santa said, “I’m known to all this night.”

Rimmer was speechless, his voice lost to the void
as he cradled his gift as one would a newborn child.
“And for you, my mechanical friend,” Santa said with a wink,
“New scrubbers for your floors, walls, dishes and sink.”

Kryten beamed, “Oh, sir, they’ll do the trick just fine!”
Cat shoved to the front and demanded, “Where’s mine?”
Santa shook his head with a patient, kindly smile
and retrieved seven suits and three ties, all in style.

The Cat preened and sniffed his new things with a purr,
“My four favorite things: silk, satin, lace and fur!”
Lister’s happy face while watching his friends in delight,
started to fade, as no present for him was in sight.

Lister tried to buck up as he knew he ought do,
But Santa was all knowing, all seeing and saw through.
“Lister, my lad, I know your heart’s fondest wish.
I can’t give you that, but I can give you this:

You’re the richest man alive, in both word and in deed.
For it’s not the material things that you crave or most need.
Good friends loyal and true, these you already know,
Health and long life will follow wherever you go.

While it may not seem like it through times good and bad,
Good luck and great fortune are yours to be had.
So cherish your friends, as they’re your family most dear,
Happy Christmas to you, Dave, and always good cheer.”

Rimmer looked to Lister, tears welled in his eyes.
“Guess I was wrong about Christmas,” he surmised.
“Happy Christmas to all,” was his heartfelt decree.
Kryten replied chirpily, “Happy Christmas, smee-hee.”

Lister’s eyes were shining, but his smile was miles wide,
For Santa was right; he was the richest man alive.
With good friends, food aplenty and lager on tap,
All that was left was, “Happy Christmas ya smegheads,
From Dave, Arn, Krytes and Cat!”