After conquering both small screen comedy (Miranda) and drama (Call the Midwife) and, now, in the midst of her first comedy concert tour, the My, What I Call, Live Show tour, Miranda Hart has mastered riding a bike so will now set her sights on the big screen.   According to Deadline, the ‘as yet […]

END_OF_DOCUMENT_TOKEN_TO_BE_REPLACED 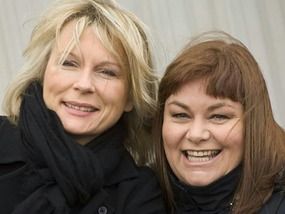 They started together in Girls on Top in 1985, continued through French & Saunders, collaborated on numerous Comic Relief sketches and, ultimately, now end with the cancellation of their latest three year collaboration of Jam and Jerusalem. In between, some incredibly successful individual efforts with Murder Most Horrid, Wild West and Vicar of Dibley from […]