When we last left Portwenn and the daily ups and downs of Dr. Martin Ellingham (Martin Clunes) and Louisa (Caroline Catz), the couple had married but, as we are all so painfully aware, their marital harmony was short lived. After a life-threatening incident, Louisa decided to take their son James Henry to stay with her mother in Spain while they try to work out their problems. As we see, the Doc is heartbroken by their departure, and comes to the realization that he has got to make changes if he wants to win them back and be a family again. 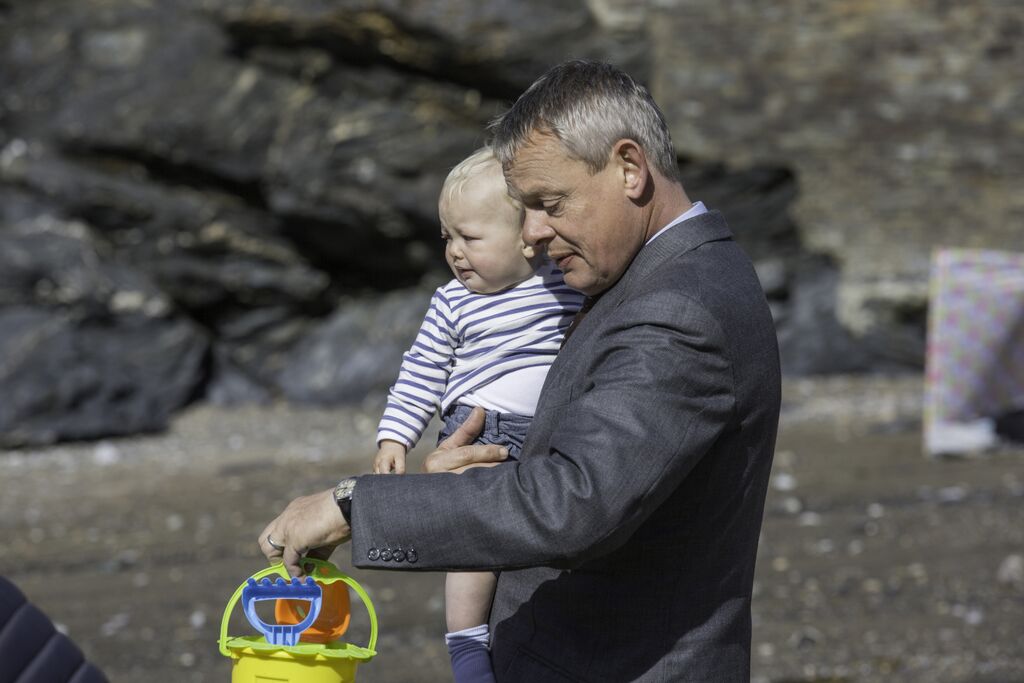 Everyone’s favorite GP with a phobia for blood and a bedside manner that makes Dr. Gregory House look like Mother Teresa will return to ITV for series 7 on Monday, 7 September with eight new episodes. Fear not, American Doc Martin fans, the Stateside return to public television stations will begin in January 2016.

If that seems further off than any law should allow, be on the lookout for a new behind-the-scenes look at the upcoming series called Doc Martin – Seven Grumpy Seasons which will air on public television stations beginning in December. More on the upcoming special from American Public Television soon so bookmark Tellyspotting so you don’t miss out on finding out when it will air in your neck of the woods.

In the meantime, American Clunatics might want to think about tuning in to PBS on Sunday, September 6 at 8p ET/7p CT for the premiere of Arthur & George on PBS Masterpiece with Martin Clunes starring as Arthur Conan Doyle.

***Now, just a few Doc Martin 7 spoilers to get you through the day***

For series 7, Dame Eileen Atkins, who plays Doc Martin’s Aunt Ruth, becomes the Doc’s worst nightmare patient as she faces a medical emergency, which she tries to ignore, but the Doc will have none of that in his surgery. Ian McNeice returns as local restaurateur Bert Large, along with Joe Absolom as his son, Al. As usual, the restaurant is in a constant state of struggling only to find Bert dreaming up yet another moneymaking scheme.

New to series 7 will be Robyn Addison (Survivors, Casualty), who plays Janice the new nanny employed to look after James Henry, and Emily Bevan, as Dr Rachel Timoney, the psychotherapist who tries to help the Doc to save his marriage. Interestingly, the series will feature a host of guest stars including the likes of Caroline Quentin (Men Behaving Badly, Kiss Me Kate), Gemma Jones (Sense and Sensibility, Bridget Jones’ Diary), Finty Williams (Gosford Park), Rosie Cavaliero (Prey) and, Alien‘s own, Sigourney Weaver, all with cameo roles in one episode. You might recognize the name Finty Williams as being the real-life daughter of Michael Williams and Dame Judi Dench or maybe you’ve seen her photo in the open of As Time Goes By as a young Jean Pargetter.

Remember back in the early Spring when we mentioned that the series was getting ready to audition for extras for series 7? Well, it came as no surprise when more than 800 local people turned up in Port Isaac for the opportunity to be a part of the new series, even if it was just for the day. The following day, as the doors of the church hall opened, there was a queue of 150 babies, prams and push chairs in tow, hoping to be selected for the role of 11-month-old James Henry. Archer Langridge, Harry Rossi Collins, Maverick Bentley and Olly Gard took turns as James Henry over the course of the new series.

Doc Martin 7 airs on ITV, 7 September and on Public Television stations in January 2016.