The BBC has confirmed the first two titles for the forthcoming 4th series of Sherlock. Sadly, no official airdate has been confirmed as of yet but we are getting close enough to where bits of information are starting to be leaked out in true Steven Moffat and Mark Gatiss fashion. The co-creators/writers of Sherlock seem to have a knack for knowing when fans of the series are within minutes of practicing spontaneous human combustion in their desperate need for any kind of information about the next set of episodes. 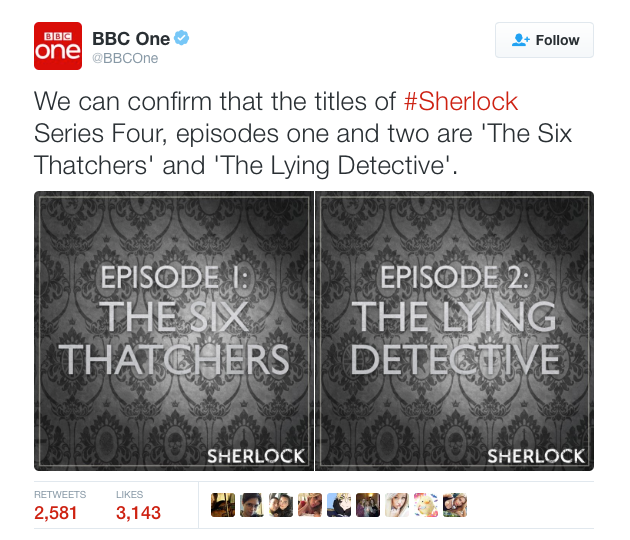 While we can all speculate and hope until the cows come home that we will see the return of Moriarty along with the possibility of a ‘third Holmes brother’ (as if two aren’t enough) just what do these two titles actually reveal about the next set of three episodes.

Thankfully, there are a few practicing Sherlock’s in residence over at Digital Spy who have taken it upon themselves to dissect the titles for evidence and speculate on our behalf trying to determine what they mean.

Watch for Sherlock 4 in early January 2017 on PBS and BBC. Until then, I’m afraid we’re all going to have to be happy with the titles of the first two episodes….