As American audiences work their way towards the end of series 7 of Call the Midwife, official word out of the UK is that series 8 has begun filming! If a picture is worth a thousand words then Mondays post from the official Call the Midwife Twitter page coupled with the simple phrase, “It’s happening”, must be considered priceless. Jenny Agutter, who plays Sister Julienne, is all smiles holding a clapperboard for the first take of the next series which will air, most likely, in early 2019 on BBC1 followed by an early Spring 2019 broadcast on PBS. 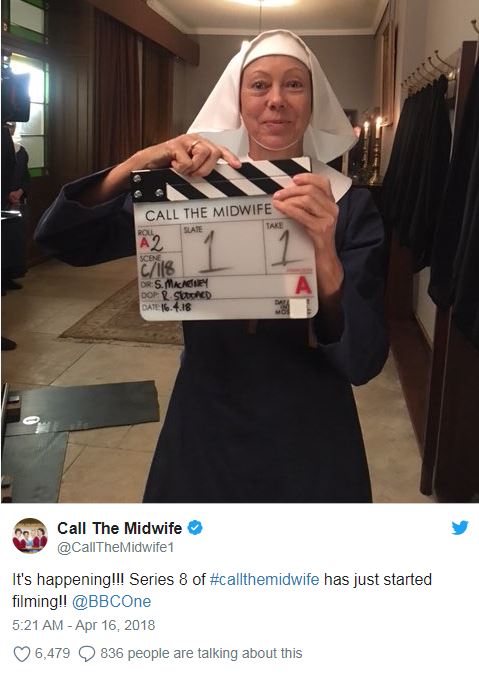 Having seen the final episode which is set to air on Sunday, May 6 at 8pET/7pCT on PBS, you’d best head to the store immediately and pick up the economy size box of tissues as you’re going to need it over the next few weeks with only 3 episodes remaining in series 7. Without divulging any spoilers, series 8 will take us forward in time to 1964 picking up a few years after the drama that was the series seven finale.

If you find yourself suffering from Call the Midwife Separation Anxiety over the next few months, there’s still time to check out the Call the Midwife Location Tours at The Historic Dockyard Chatham. For more information, click here.

Call the Midwife S7 continues Sundays at 8pET/7pCT on PBS.