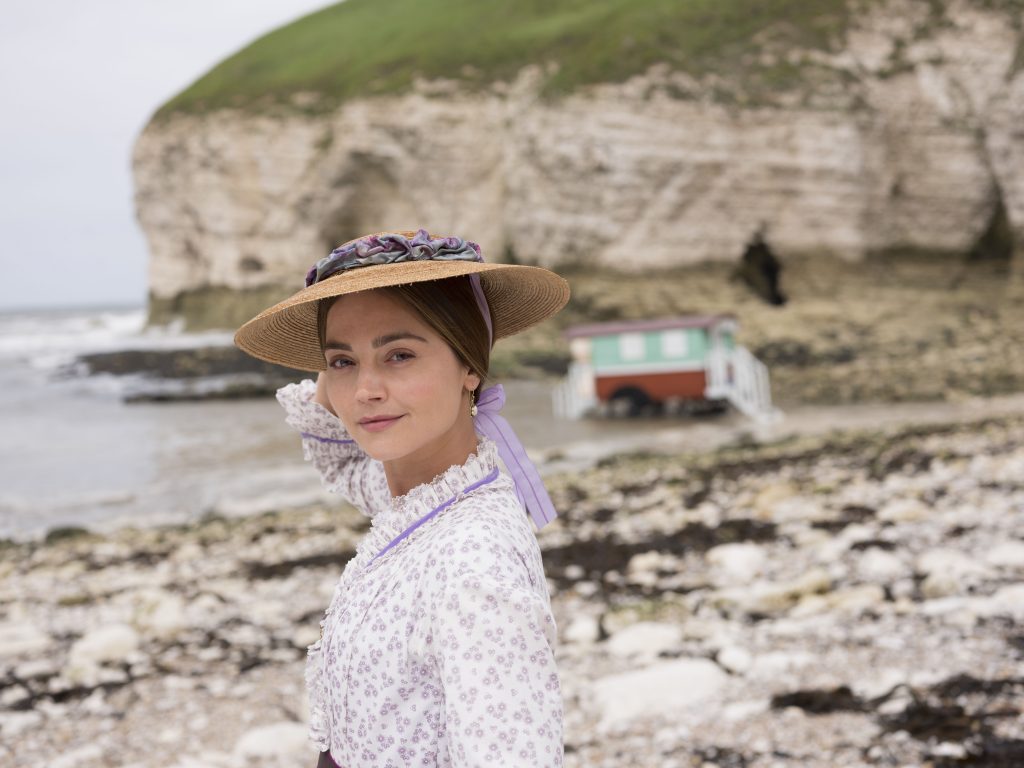 This week couldn’t get any better.

On the heels of speaking with Lucy Worsley about her two-part series Victoria & Albert: The Wedding, I had the unbelievably good fortune to spend a bit of quality time with the delightful Jenna Coleman, a.k.a. Queen Victoria.

As all of our calendars (with the big red circle around January 13) tells us, series 3 of Victoria begins Sunday on PBS at 9 p.m. Eastern /  8 p.m. Central.

Jenna recently talked at great length about some of the insights she’s learned right along with viewers about Queen Victoria — and about how she prepared for the role of a lifetime.

Bill Young: You had the opportunity to read the actual Queen Victoria diaries in preparation for this role. How did this help in your preparation for the role and what kind of insight did it give you into Victoria?

Jenna Coleman: It was a huge help. It gives you the kind of mundane details, the tiny snippets of her life. Things about her children, something she found funny or something she learned. It gave me a regularity or familiarity to where you begin to hear her voice and could understand her daily rhythm and routines. It really gave a picture of how she lived. In terms of a tool for wanting to get to know a character, I didn’t really have much more really so it was immensely helpful.

BY: Did anything surprise you after going through her diaries?

JC: I think how honest she is. And, how unabashed and frank, knowing that these were her diaries that people were likely to read. The whole point of the diaries started when she was young so that, literally, her mother could read her thoughts like if was always a form of control. That was the initial point of them. Knowing that, I think just how unabashed she was with her opinions. I found her very funny as well. To be honest, her discipline for journal writing was pretty astounding. She has to be one of the most prolific journal writers in history.

BY: It was striking as far as how ahead of her time she was. She was impulsive, in a good way, from a strong female standpoint and, obviously, at a time when women couldn’t vote, this was unheard of.

What do you think it was when you look at Lord M, what was he able to see in Victoria when all others around her just saw a little girl who had no business being Queen and were just waiting for her to fail?

JC: I think Lord M was the only other person that didn’t have an agenda. He didn’t really need an agenda and I think Victoria could sense that immediately. He gave her freedom and didn’t try to manipulate her and, ultimately, she felt safe. That’s really what bonded them from the start.

I think also there was definitely something of a father figure there, something that Victoria never really had before. He definitely represented a father figure to her and because of that, they had a really amazing friendship. She was obsessed with him. She used to write about him a lot. Everything he said, what he thought, his opinions. She held him in such high regard.

BY: For you personally, waking up and coming to the realization that you are getting ready to play Queen Victoria was probably a bit daunting. But what about being 18 and you wake up and find yourself the real Queen of England?

JC: Absolutely. I did go back to that and tried to understand what that must have felt like. With Victoria — and again, what is probably one of the extraordinary things about her — she was terrified and very humble in many ways. She put down her intentions in her diary. She may be young, she may be inexperienced, but there was nobody with more good intentions and good will to do what’s right.

It was clear how serious she took her duties. Ultimately, as everyone told her she was inexperienced and that she would fail, and with her obtuseness and stubbornness, she refused to acknowledge it. In a way, it gave her that fire to prove everybody wrong. She really went into it with that gust of independence, freedom and energy — probably what she had been craving for a really long time.

BY: Throughout the series so far, you see how difficult it must have been for Queen Victoria to balance having eight children and, even though she was Queen, seemed to be continuously judged for maintaining a sense of self. She remained very strong. 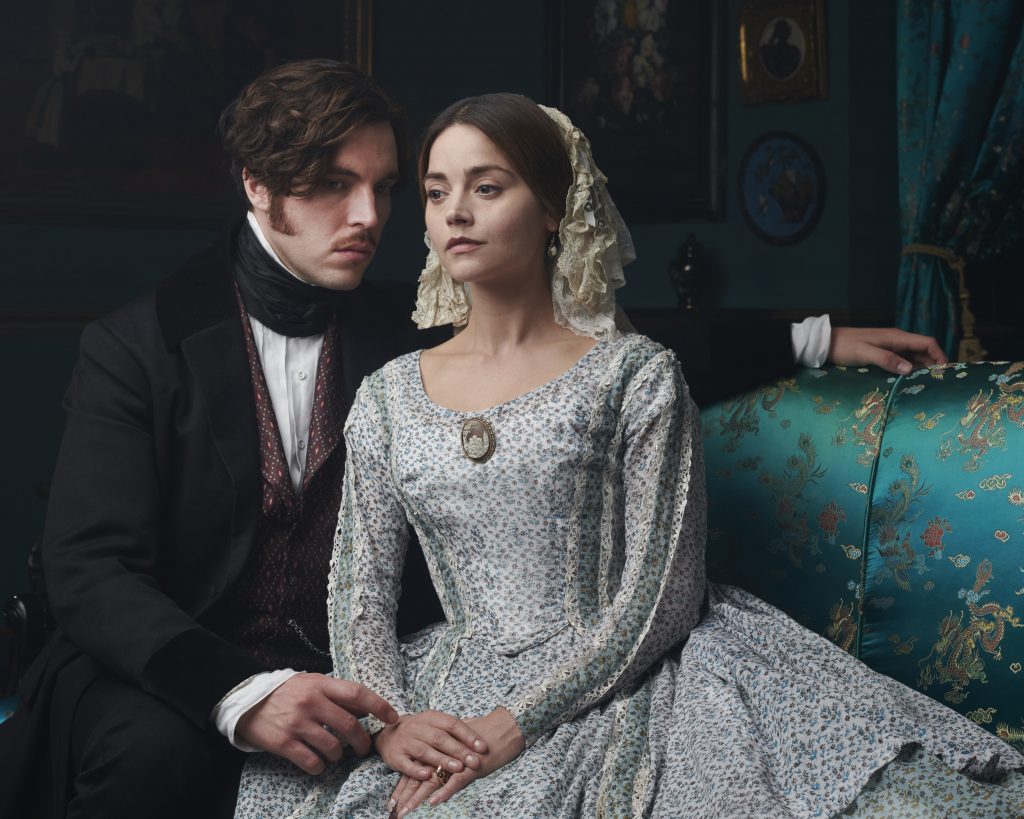 BY: The relationship between Victoria and Albert. In a nutshell, Albert is rational, Victoria is emotional. They seemed to be quite different yet perfect for each other.

What one thing do you think they learned from each other?

JC: I suppose it was like a balancing act between Albert, who was a bit more withdrawn, shy and scientifically learned, and Victoria, the opposite. It was kind of a yin and yang, where they are so opposite, really, but they bring each other more into balance. Albert forces Victoria to look at things more rationally while Victoria teaches Albert to look at things more emotionally.

They end up making such a team, I suppose, but it definitely wasn’t an easy ride. The first couple of years of their marriage was hard. Albert was really a rare man of his time. He was probably the only man in the country that was not master of his own house.

BY: You’ve now had the good fortune to portray Victoria for three series, including the series that premieres this Sunday on PBS. Without putting you on the spot, and putting aside the fact that Victoria was Queen, do you see any similarities between yourself and Victoria?

JC: Oh, gosh. I’d like to think I’m loyal and I am stubborn. Those are probably the two similarities as I try to think if my friends would agree with that. I’m definitely emotionally-led, I’m definitely a romantic. I think Victoria was very much a romantic.

It’s very interesting to have an emotionally-led Queen whose life is all about restrictions and protocol and ways of behavior. This is what I find most interesting about playing her.

BY: It must be quite gratifying to see a large, young female audience for the show and to be able to connect them with history and Victoria.

JC: Absolutely. It’s amazing to see that there are definitely a number of young women coming to the series. Actually the first series, in particular, because it was about such a young woman finding her voice, especially early on. It definitely felt like there was a lot of support and viewers coming from a younger demographic. Really, it’s so gratifying to me when someone comes up to me and says “I didn’t know that” or “I never knew she had nine children.”

There’s so much of her, considering she is one of the most famous women in history, that is untold and there so much of her life we don’t know about. We see the young Victoria and we see the old Victoria. We don’t see the mother ever ,really. I don’t think we really have ever on screen … the middle years, the married years. I feel like it’s not been done before, so that is fun because I’m loving learning it as I go and learning more about her, so it’s gratifying when other people say the same thing.

BY: Do you find it more challenging from an actor’s standpoint playing someone who was real as opposed to a fictional character, because you have to adhere to what history dictates?

JC: Not really, I don’t think. It’s not more difficult, I don’t think, because, when you think about it, playing a historical character gives you more of an opportunity to research. But what is interesting is that we don’t actually have video footage of Victoria, so what was harder is that you end up competing against an idea of somebody.

We don’t really know how she spoke or moved. There’s one amazing picture of her laughing when she’s older, which kind of captured a certain character. It’s not like I can sit through some video footage, so you are kind of creating an idea of someone based on the diaries and based on biographies which can be leading in certain ways.

I suppose the most challenging thing is having these reams of material to pour over that is unedited.

BY: How much have you been able to sit down with series creator, Daisy Goodwin? Do you sit down with her throughout the production and discuss how this or that sequence might be played? Obviously you have the script, but how much are you able to interject your take on a particular scene where there is no video footage?

JC: Daisy is simply amazing. She is incredibly open and collaborative and also incredibly educated and well-read on Victoria. In terms of a sounding board, not only has she written the scripts, but she’s incredibly well-versed. She’s very collaborative and not particularly protective. There’s a really good dialogue between us, which I really value.

BY: With series 3 beginning Sunday on PBS, what do U.S. and, ultimately, UK fans of Victoria have to look forward to in this series?

JC: The French Revolution. The monarchy is not as safe as we thought. The Queen visits Ireland for the first time. Then we culminate with the Great Exhibition, which is Albert’s crowing glory moment. Trying to recreate that was a real highlight.

And, a little domestic turmoil thrown in for good measure.

Sadly, at this point, I had to cut the interview short as I could have continued until it was time for series 4 of Victoria to premiere. My last question for Jenna was to ask what’s next on her agenda, and it seems she is headed to the Old Vic Theatre to star alongside Sally Field and Bill Pullman in Arthur Miller’s All My Sons.

According to Jenna, the last time she did a play, she was 18 at the Edinburgh Fringe. She said she can’t think about a live audience because it was making her feel a bit queasy, but she did sound so excited to be in the rehearsal room again, especially with the likes of Pullman, Field and Colin Morgan (Merlin).

(The conversation above was lightly edited for clarity.)