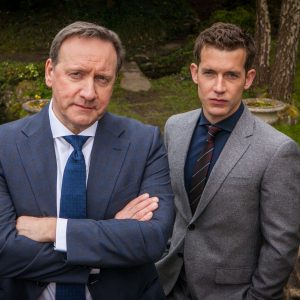 With American public television audiences currently in the middle of season 15 of Midsomer Murders, the British detective drama based on Caroline Graham’s Chief Inspector Barnaby book series and adapted for television by Anthony Horowitz, filming has begun on the 21st season of the highly successful crime drama.

Fans of the series got their first hint that things were about to begin through the series’ official Facebook page showing some of the principle cast going through an early script read-through.

Season 20, which is currently transmitting on ITV in the UK, consists of six, two-part episodes, “The Ghost of Causton Abbey,” “Death of the Small Coppers,” “Drawing Dead,” “The Lions of Causton,” “Till Death Do Us Part” and “Send in the Clowns.”

Midsomer Murders series lead Neil Dudgeon, who plays DCI John Barnaby, told Digital Spy in an interview to promote series 20 that while the show is getting ready to enter its third decade, the show “can go on and on.”

“If there’s a formula at all, it’s a very loose formula,” Dudgeon continued. “The premise is, ‘Something investigation-worthy happens somewhere rural and two policemen turn up to find out what’s gone on.’ Around that, write any story you want. It can keep re-energizing itself. I think the show can go on and on”

Thankfully for long-time fans of the series, with 122 self-contained episodes behind them, there doesn’t seem to be any end in sight in the near future.