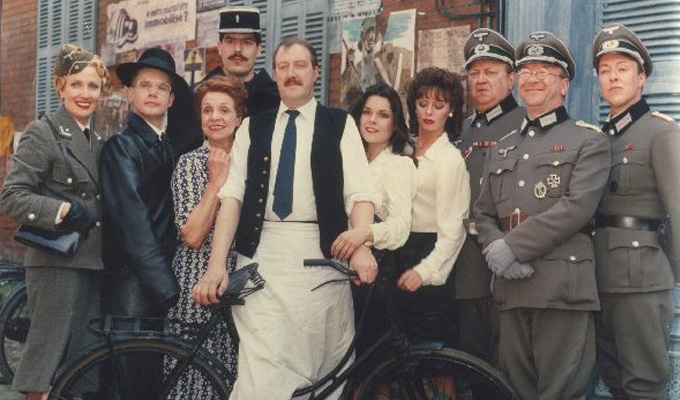 Listen very carefully…I will say this only once! The surviving cast of ‘Allo ‘Allo will reunite to unveil a blue plaque at Lynford Hall in Northfolk, the country house which stood in for Cafe René. Dedicated to preserving and fostering the tradition of British comedy, the British Comedy Society will unveil the plaque on the site on September 7 ahead of the 35th anniversary of the pilot episode, which premiered on the BBC on December 30, 1982.

The celebration, which was announced earlier this week, is designed to coincide with the anniversary of the David Croft/Jeremy Lloyd comedy that ran for nine series and 85 episodes from 1982-1992. ‘Allo ‘Allo brilliantly told the fictional story of the military from the Axis powers (Rome-Berlin-Tokyo) occupying the town of Nouvion, France, and stealing all of its valuable artifacts including  The Fallen Madonna by fictional artist van Klomp, the Cracked Vase with the Big Daisies by Van Gogh, the first cuckoo clock ever made, and some silver.

At Lynford Hall, a Norfolk country house that served as the filming location for Nouvion town square and the exterior of the café, the British Comedy Society will unveil a new blue plaque in honor of the show, in aid of the Actors’ Benevolent Fund. In addition to the unveiling, those in attendance will bed treated to a gala lunch; auction of memorabilia; along with a great opportunity to meet with both the stars and other fans of this classic BBC television comedy.

Interestingly, Lynford Hall which was built int he 1850s, was also featured in Croft and Perry’s other comedies You Rang My Lord and Dad’s Army, most of which was filmed just ten miles away in the village of Thetford.