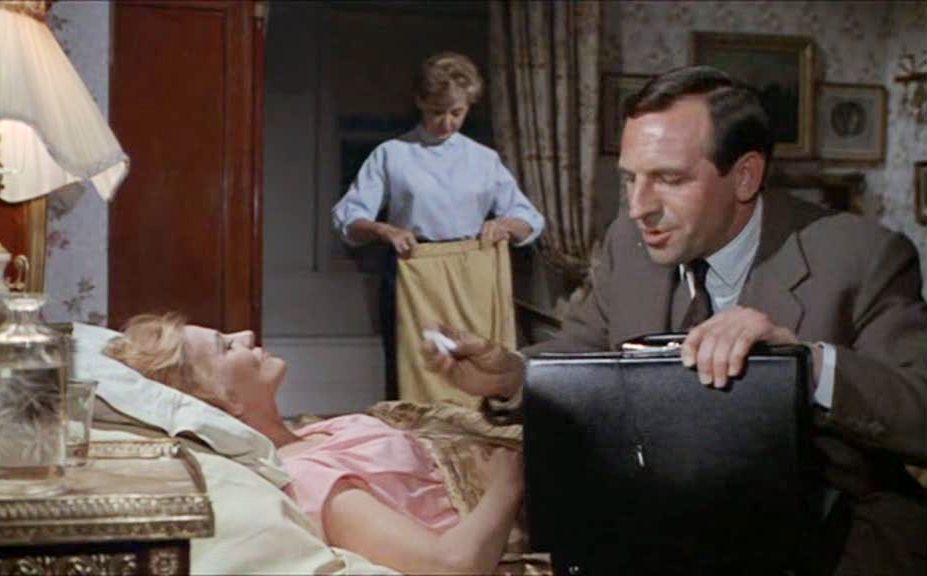 I love October for several reasons. One has to do with Turner Classic Movies launching their annual archive of scary movies many of which haven’t seen the light of day since the movie opened and, for good reason. Thursday night’s entry, The Devil’s Own (released in the U.S. as The Witches) was a 1966 Hammer Films production filmed in the village of Hambleden, Buckinghamshire.

The Devil’s Own stars Oscar-winning actress Joan Fontaine (Rebecca) as an English schoolteacher, Gwen Mayfield, who packs up her belongings at a mission school in colonial Africa to head home to England. The local witch doctors have led a rebellion, and they reach the school before she is able to escape—the shaman wearing a body mask. Cue Gwen screaming. Let the games begin…

What made this movie interesting was the fact that half-way through you encounter a very familiar face as part of the surprisingly strong supporting cast from a classic British comedy. Leonard Rossiter, better known to British comedy fans as Reginald Perrin in The Fall and Rise of Reginald Perrin, plays a rather smug Dr. Wallis who visits Gwen to give her a tetanus injection.

Gwen wakes in the night to see an African object on her bedside table, which frightens her. She gets out of bed and calls for Stephanie, but when she opens the door she is apparently met by the same body-masked witch doctor she encountered in Africa. She faints into a relapse of the breakdown she suffered in Africa. It only gets weirder from here…

Interestingly, Joan Fontaine actually found the story for The Devil’s Own, purchased the rights to it and then approached England’s House of Horror films, Hammer Films, to produce. Fontaine also co-produced the film which marked her return to the big screen after a number of years appearing in TV series including The Alfred Hitchcock Hour, Wagon Train, The Dick Powell Theatre, General Electric Theatre and The Bing Crosby Show.

This reminds me of watching Having a Wild Weekend, starring the Dave Clark 5, and seeing a young Clive Swift (Richard in Keeping Up Appearances). What other British comedy stars have you seen in bit parts of movies before becoming the established comedy stars we’ve come to know and love over the years?