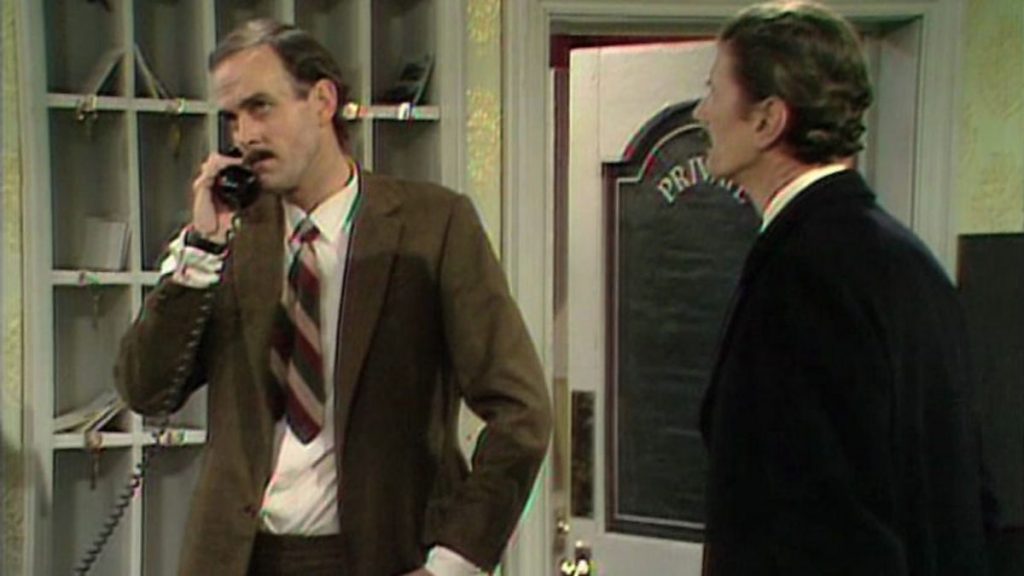 With a TOH to John Cleese, we remember Michael Gwynn who momentarily fulfilled Basil’s wishes of improving the class of guest that stayed at Fawlty Towers. Gwynn was one of a long line of talented actors who paid a visit to Fawlty Towers over the course of the 12 episodes (yes, there were only 12). Gwynn passed away on 29 January 1976 at the age of 59.

Gwynn appeared in several Hammer Studio films in addition to starring in the 1960 film, Village of the Damned, and also played Hermes in Jason and the Argonauts. Despite a lengthy film, television and stage career, he will forever be linked to his brief stay at Fawlty Towers, checking in as conman ‘Lord Melbury’ in the series’ first episode, “A Touch of Class”.

In addition to Gwynn, Fawlty Towers also entertained a host of other name actors such as Robin Ellis (the cockney detective Danny Brown in “A Touch of Class”), Bernard Cribbins (the pretentious spoon salesman, Mr. Hutchinson, in “The Hotel Inspectors”), Geoffrey Palmer (Doctor Price in “The Kipper and the Corpse”) and Nicky Henson (Mr. Johnson in “The Psychiatrist”) episode. All had very successful careers that spanned decades but will be forever known for their short stay at Fawlty Towers.

To illustrate that concept, we had the good fortune of interviewing Nicky Henson several times for various PBS specials. For Fawlty Towers Revisited, which looked back at the series on its’ 30th anniversary, Henson, who passed away in December 2019, joked at the time that despite his 50 years of professional acting, his tombstone would probably read “Here lies Nicky Henson – he was in one episode of Fawlty Towers“.

Remembering Michael Gwynn whom we lost OTD in 1976. Michael was a wonderful person and highly talented actor who gave a brilliant performance as Lord Melbury on Fawlty Towers. @FAWLTYTOWERS_ pic.twitter.com/BA6xafZSCO

Michael Gwynn passed away on 29 January 1976 of a heart attack in London at the all-too young age of 59.