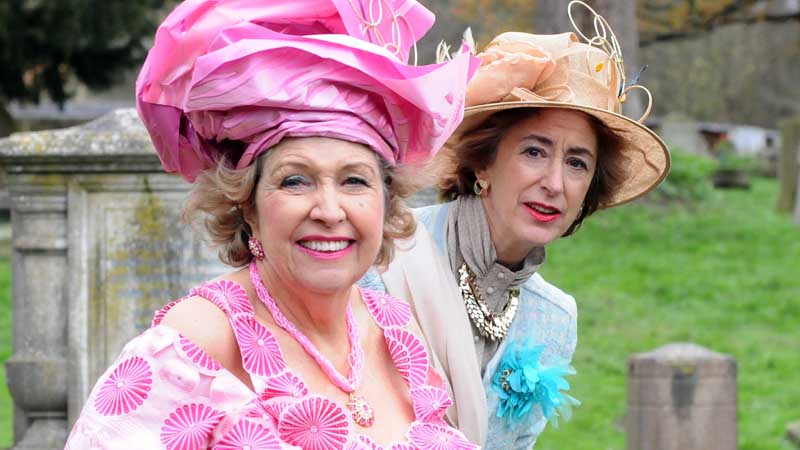 Aptly described in the British press as “Talking Heads meets Keeping Up Appearances“, the highly successful BBC Radio 4 series, Ladies of Letters, made the always dangerous leap to television back in 2010. Facing an immediate uphill challenge from the sheer fact that the radio series starred the greatness of Patricia Routledge and Prunella Scales, thankfully, the wonderful acting talents of Maureen Lipman (The Pianist) and Anne Reid (Sanditon, Last Tango in Halifax) takes the long-running radio success and meets this new medium that uses video head on with great success.

Like the radio series, the two widows met under a table at a wedding, when both were a bit drunk with merriment, and subsequently began to forge a “relationship” via letters. Unfortunately, Irene (Maureen Lipman) and Vera (Anne Reid) also forge a constant battle with civility. Vera and Irene always strive to outdo each other, whether with their recipes, holiday destinations or who has the best grandchildren.

What started out as a simple game of written improvisation from the brilliant minds of writers Lou Wakefield (Irene Spencer) and Carole Hayman (Vera Small), blossomed into four books, ten radio series and then a television series.                At Tellyspotting, we had the great good fortune to catch up with Carol and Lou just prior to when the TV series first came out in 2010.

Fittingly, in true Ladies of Letters fashion, the entire interview was handled separately and by e-mail. At times, it was hard to know when Carole and Lou were at the other end of the pen or if Irene and Vera took over. In part 1, Carole and Lou talked about how the characters of Irene and Vera were created. In part 2, Carole and Lou (or, was it Vera and Irene) talk of their transition from books to radio to television and in part 3, talk about what’s in store for the second series which, at the time, was just getting ready to premiere in the UK.

Ladies of Letters returns to public television stations across the U.S. via American Public Television over the course of the next several months. Tellyspotting says, check it out first time or revisit the greatness.