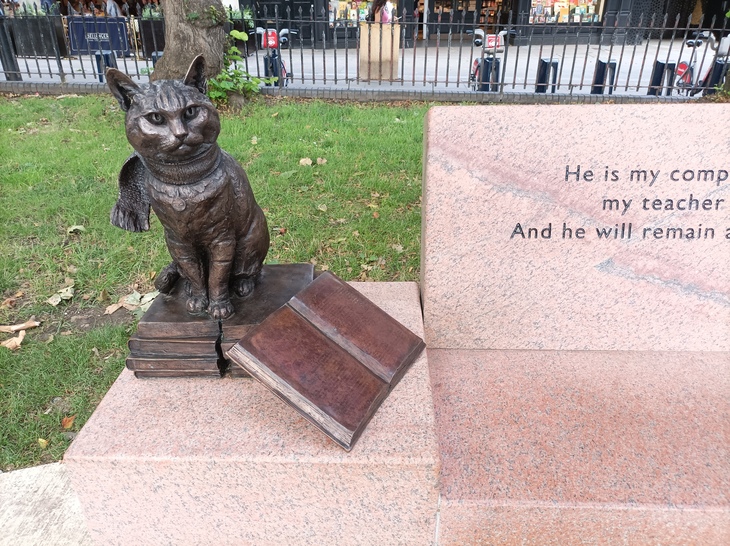 With his trademark scarf in tow, Bob now permanently presides over Islington Green providing, perhaps, the best photo op this side of the statue of Mr. Bean in Leicester Square. The stray ginger tomcat, who sadly crossed the Rainbow Bridge in June 2020, became a global celebrity after the emergence of his heartwarming friendship with busker and Big Issue seller, James Bowen. Their story was told in a series of inspiring books and a 2016 movie starring Bob, Luke Treadaway (The Hollow Crown) and Joanne Froggatt (Downton Abbey).

It’s an incredible story of the relationship between a homeless London street musician/recovering drug addict who crossed paths with an injured and abandoned Bob in north London in 2007. As Bowen worked with pet charity Blue Cross to nurse Bob back to health, the loyal feline helped Bowen rebuild his own life. James may have saved Bob, but Bob definitely saved James.

Bowen and Bob, perched on his shoulders, became fixtures outside Angel tube station as the knitted scarf-wearing Bob charming the crowd with endless photo ops and high-fives while Bowen strummed his guitar, selling the Big Issue.

The life-sized bronze statue of Bob, created by sculptor Tanya Russell, depicts Bob in his trademark scarf, perched on a stack of books. It’s positioned on a pink granite bench, engraved with the motto: He is my companion, my best friend, my teacher and my soulmate. And he will remain all of those things. Always.

The statue and bench in the top right hand corner of Islington Green is across from the Waterstones and should be considered a ‘must-see’ if you are in the area. Unveiled in July 2021, Bowen said: “I am so incredibly proud of Bob and grateful for the time we shared. He enriched my life from the moment I met him. He saved me and he touched the lives of millions, providing optimism to people across the world.”

I am so thankful on so many levels that I had the great good fortune of meeting Bob once at Waterstones in March 2017 at a ‘paw signing’ of the book, A Streetcat Named Bob. It was, without question, the best two hours spent in line ever while waiting for anything.