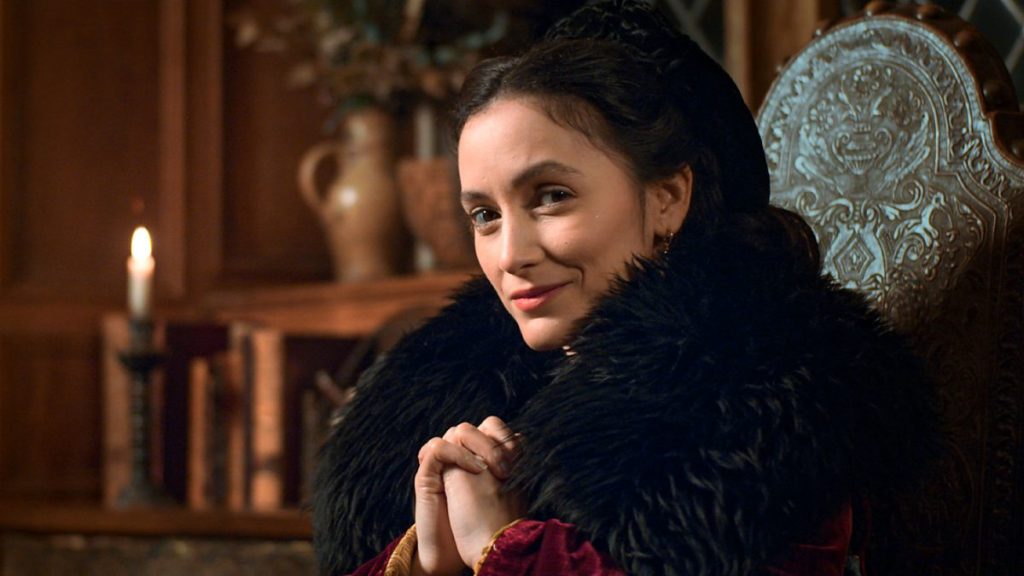 The Boleyns: A Scandalous Family charts the rise and fall of the Boleyns in an epic three-part series that premieres this Sunday on PBS. Starring Max Dowler as Thomas Boleyn, Rafaëlle Cohen as Anne Boleyn, Phillip Brodie as Thomas Howard and Sam Retford as George Boleyn, the series uses 16th Century original sources so we get to hear the Boleyns in their own words.

Ultimately, it is a thrilling story of love, sex, betrayal and obsession played out in a Tudor court rife with gossip, backstabbing rivalries and intrigue. This story is brought to life through dramatic reconstruction and the inside view of some of the world’s leading Tudor experts.

– Anne writes Wolsey a letter to ask how the annulment was developing. At the bottom, a postscript from King Henry showing Anne’s power over him.

Explore Thomas Boleyn’s determination to elevate the family name. His expectations and ambitions for his three children will take them into the heart of the Tudor court.

Meet a more sophisticated Anne Boleyn as she returns to England from France having grown into a real beauty. Anne dazzles the Tudor Court while her family plays the long game to catch a king.

Follow Anne’s journey as she becomes queen and changes the course of British history. This is a dangerous game and the Boleyns have no idea of the high price they will have to pay.

The Boleyns: A Scandalous Family — more family betrayal and backstabbing rivalries than the law allows beginning Sunday on PBS. Then stick around for the 2nd season premiere of Guilt on Masterpiece at 9pET/8pCT.