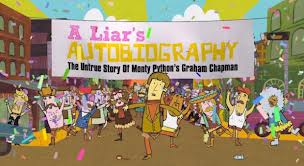 In true Monty Python style, the upcoming self-described ‘animation epic’, A Liar’s Autobiography: The Untrue Story of Monty Python’s Graham Chapman, tells the story of (surprise) Graham Chapman, probably best remembered as ‘the dead one from Monty Python’. Described in the Hollywood Reporter as unorthodox, freewheeling and, by fellow Python member John Cleese as a […]