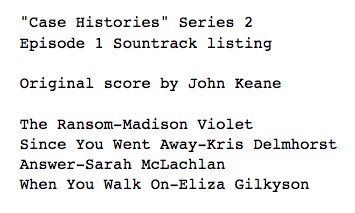 One of the best series to come along in recent memory is Case Histories. Besides Jason Isaac’s brilliant portrayal of Jackson Brodie, the soundtrack should almost get a co-star credit. It is so much a part of the series, filling the screen as the ex-cop from Yorkshire jogs across the hills overlooking Edinburgh, listening to mournful American country singers and mulling over his tangled life.

For series 1, which premiered back in 2011, author Kate Atkinson worked painstakingly with series producers to create the haunting soundtrack of songs used so brilliantly in the series.

Atkinson explains, “Like me, Jackson is a long-term country fan and for each of the novels I’ve had a playlist — something which often evolves during the course of the novel, but which somehow points me to something essential at the heart of each book. Sometimes the tracks don’t seem particularly relevant, but they are to me (and Jackson).”

In case you missed series 1 or, for some reason, did not compile a playlist of the music, PBS’ Masterpiece series has compiled a complete list of songs from series 1. Warning … you going to need a couple of iTunes gift cards.

Since the premiere last Sunday on BBC One of Case Histories 2 it is abundantly clear that the same importance of music has been placed on series 2 as it was in series 1. The Internets have been flooded with inquiries searching for a music playlist for the first episode. A huge thank you to Michael Winter, Production Executive with Ruby Films, the producers of Case Histories, for supplying us with the commercial tracks for last week’s episode. Time to top off that iTunes card … trust me.

As soon as we can get episode 2 and 3 playlists, we’ll post asap (update: here’s the season 3 list).

For those who may have missed the premiere of series 2, which transmitted on BBC One last Sunday, the three-part series continues tonight on BBC One at 8:30pm.

Delving into more dark tragedies of the past which continue to resonate in the present, Jackson Brodie’s life doesn’t get any simpler. He may bring optimism and resolution to the lost and bereaved, but he continues to struggle with his own past and present. A professional mistake born of personal confusion comes back to haunt him with repercussions for his integrity and his relationship with Louise Munroe. His life is further complicated by a new woman in his life, the reappearance of Julia Land and an increasingly precocious daughter.

Let’s hope series 2 finds its way to PBS in the U.S. in the not-too-distant future.