As Poldark entered collective mind palaces of UK viewers last night with the premiere of series 2, American audiences continue to brace themselves for what’s next for Captain Ross, Demelza and the gang in Cornwall. Over the past few weeks, we’ve done our best to prepare everyone for the greatness that is about to grace our small screens beginning Sunday, September 25 on PBS. Aside from a look back at where we are, we’ve also tried to give you a  little behind-the-scenes sense as to what it takes to bring 18th century Cornwall into your homes each week.

First it was ‘a day-in-the-life with Poldark historical advisor, Hannah Greig. Then we profiled horse trainer, Mark Atkinson, who trains Seamus for Captain Ross Poldark in addition to all the other horses used in the series. Fortunately the rugged Cornish coastline hasn’t changed much since the 18th century. While these are two very important tasks when creating an authentic period piece that need to combine historical accuracy while trying to remain true to the story. The third and, perhaps, most difficult effort is just how does one cook for Poldark? 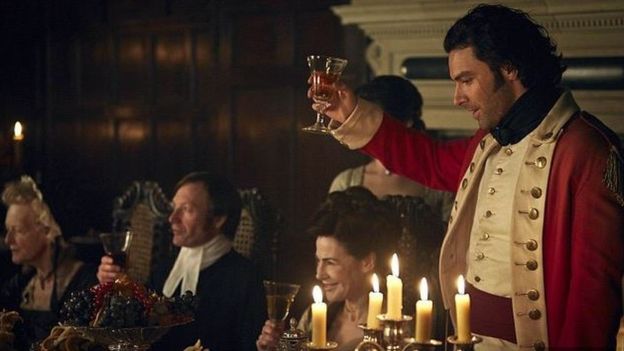 Much like its mega-hit predecessor, Downton Abbey, there are definite tricks of the trade to make banquets look as good as possible on camera.  “Food created for the show does not need to be eaten, but it should reflect the social standing of the character“, says Poldark food stylist Genevieve Taylor.

“I ended up wrapping pastry around two Quality Street tins to make a giant pie,” she said. “It’s the biggest pie I have ever made. The pastry was secured with cocktail sticks and I used loads of salt to make it extra shiny. With these creations, you don’t know how long they are going to be sat about on set for – it’s not the star of the show and is made with longevity in mind.”

“There is lots of historical information available, including cookbooks from the period. For example, the art department would get in touch and say we need food for a harvest supper for a well-to-do family. It’s my job to make the food look correct for the time and make it beautiful,” said Taylor.

Having witnessed this first hand several years ago after spending a couple of weeks on the set of Father Brown during filming of series 3, it’s clear that you wouldn’t want to eat anything that is prepared for the dinner sequences. Even the most seemingly appealing dinner wilts after a day-long shoot at the dinner table.

For a more in-depth understanding of Taylor’s work, tune in to The Food Programme: Cooking for Poldark featuring food stylist Genevieve Taylor which broadcasts on BBC Radio 4 Sunday 11 Sept at 12.30.