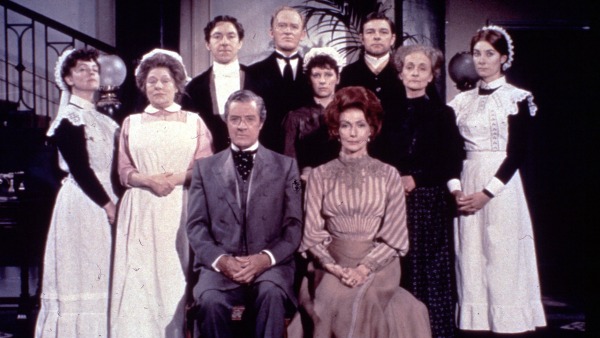 As a number of today’s PBS viewers believe that British drama began in 2010, when both Downton Abbey and Sherlock burst onto the small screen, we here at Tellyspotting thought it was time to step inside Mister Peabody’s WABAC Machine, set the dial for 1971 and pay a visit to 165 Eaton Place, the fictional home of Upstairs Downstairs.

From the Vault is our new weekly feature where Bill reaches back for a favorite, memorable clip or classic highlight.

Set in the fashionable Belgravia section of West London, the original series felt a lot like the Downton Abbey of the ’70s with their weekly depiction of the servants “downstairs” and their masters, the Bellamy family, “upstairs” between the years 1903 and 1930.

Like its 21st century sibling, which also wrapped its storyline around the sinking of the Titanic and the World War I, Upstairs Downstairs chronicled the slow decline of the British aristocracy using significant events to document the social and technological changes that occurred between those 27 years, including the Edwardian period, the Suffragettes, First World War, the Roaring Twenties and the Wall Street Crash.

Upstairs Downstairs, based on an original idea by actress friends Jean Marsh and Eileen Atkins, ran for 5 series and 68 episodes from 1971-1975 and featured a number of well-known or soon-to-be well known British actors. In addition to Marsh and now-Dame Eileen Atkins, the series jump-started the careers of Anthony Andrews, Gordon Jackson, Lesley-Anne Down and Pauline Collins.

And now, the location 165 Eaton Place rivals 10 Downing Street and 221b Baker Street as the most universally known street address.

One interesting note from the Upstairs Downstairs archives is that the show almost never came to be. The show suffered from the outset as it was first declined by Granada Television, which already had a period drama in the pipeline (I guess one period drama was enough in those days). Then it entered the world of internal politics at London Weekend Television with a sales department who failed to see any potential, from a viewer standpoint, for a period drama.

Series 1 was filmed in 1970 and ultimately sat collecting dust on the shelf at London Weekend, waiting on a transmission date.

Finally, on October 10, 1971, ITV had an opening in its schedule at the highly unfashionable time of Sunday nights at 10:15 p.m. and rang up London Weekend to fill it.

Thankfully, LWT chose Upstairs Downstairs and the rest, as they say (whoever “they” are), is history.