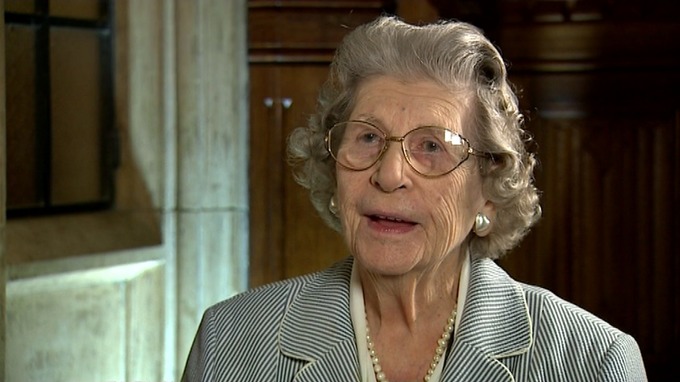 Jean Campbell-Harris, aka Baroness Trumpington of Sandwich in the County of Kent, has passed away at the age of 96. It was her mastery of languages (she was fluent in French, German and Italian) that led her to become a member of the legendary code-breakers of Bletchley Park in Buckinghamshire. Joining at the age of 18, Campbell-Harris transcribed intercepted messages from German submarines from the early stages of World War II.

Unable to socialize with others during her time at Bletchley Park, she spent her free time hanging out at London’s key spots for the über society-conscious, including the Ritz and Claridge’s, where she continued her younger life of considerable privilege in London.

Early in Jean’s growing up, her parents traveled in a fast lane which included the then Prince of Wales, later the Duke of Windsor, and future wife, Wallis Simpson. After losing everything in the Wall Street crash of 1929, the family was forced to quickly downsize, which was challenging to say the least.

“We used to say my mother’s idea of being poor was going to the Ritz on the bus,” Campbell-Harris recalled.

Described as one who smoked, drank and jumped into swimming pools fully-clothed, Campbell-Harris left for America after the war. She met her schoolmaster husband, Alan Barker, and later returned to the UK in 1953.

She entered politics as a member of the Conservative Party in local government, where she was the mayor of Cambridge from 1970-1971.

Then in 1980 she became Baroness Trumpington of Sandwich in the County of Kent, joining the Margaret Thatcher government with a focus on women’s issues — women in prison and mental health, in particular. She acted in a semi-diplomatic capacity on behalf of the UK at the UN Commission on the Status of Women.

During her 37 years in Parliament, Baroness Trumpington sat on a number of committees including the House of Lords Office Committee, the Refreshment Sub Committee and the Works of Art Committee.

She was also part of the political campaign to posthumously pardon Alan Turing in 2013 for his criminal conviction for homosexuality, telling the House of Lords: “While in 2009 the then Prime Minister Gordon Brown issued an apology for Turing’s treatment, this government should do more. This is not about legal issues but about recognizing the debt this country owes Alan Turing.”

It was Turing who led Hut 8, which, during his time working for the Government Code and Cypher School (GC&CS) at Bletchley Park, was the section that was responsible for German naval cryptanalysis. It was Turing, along with fellow code-breaker Gordon Welchman, who developed a machine known as the Bombe, the device that helped to significantly reduce the work of the code-breakers by ultimately cracking the Enigma code machine used by the German armed forces to send messages securely.

Retiring from politics and public life in 2017 at the age of 95, Baroness Trumpington also appeared as a panelist on Have I Got News For You, where she mocked the BBC for requiring her to sign a form to say she was not pregnant in her 90s.