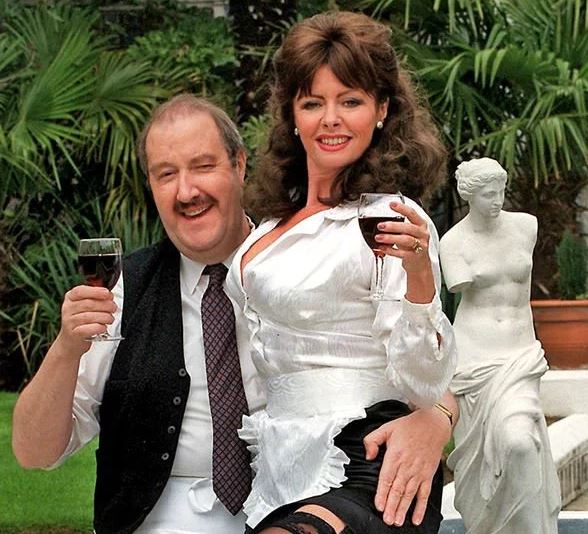 In the day and age of present day comedy whereby a number of classic British and American situation comedies are being re-made even if it’s just for a one-off special (i.e. All in the Family, The Jeffersons, Reggie Perrin, Are You Being Served, Porridge), one has to wonder whether or not the much more politically correct climate of 2019 would lend itself to a remake of the Jeremy Lloyd/David Croft classic, ‘Allo ‘Allo.

In a recent interview with the Express, Vicki Michelle, who played one of the original waitresses (Yvette Carte-Blanche) employed at Café René, the local café in Nouvion which was owned and operated by Rene (Gorden Kaye) and Edith Artois (Carmen Silvera), lamented that political correctness has played a big role in killing comedy but that she and other surviving cast members would totally be on board with a 21st century reboot of ‘Allo ‘Allo under the right circumstances.

It was the recognizably brilliant writing of Lloyd and Croft – who also wrote Are You Being Served? – which ­produced the classic farce involving a plot to hide a missing painting and return two dim-witted shot-down British airmen to Blighty. “I would only do it if I thought it was going to be as clever as the scripts that Jeremy and David produced in the first place and I don’t see how easy that would be now they are no longer alive.”

The series, which ran for 9 series (1982-1992) and 85 episodes, poked equal fun at the English, French and Germans. “The Germans were kinky, the French were randy and the English were stupid, and that is how Jeremy and David wrote the scripts,” says Michelle.  “With less sure hands at the helm it could easily have slipped into casual racism but everyone was endearingly dim.”

Owing to the fact that her biggest concern is that in today’s television landscape, commissioners are now rather squeamish about the sort of humor that caused ‘Allo ‘Allo to regularly attract a weekly average of some 14 million viewers. “The mad thing is we are allowed to swear as much as we want, which is much worse, but we have to be ridiculously sensitive about how we portray other nationalities,” she explained further. “It’s political correctness gone mad.”

“I loved how it showed the Germans as buffoons and the Brits to be daft-as-a-brush tally-ho-types without a clue,” said Michelle. “Madame Fanny was screaming about ‘flashing knobs’ and the painting of The Fallen Madonna With The Big Boobies by ­fictional artist Van Clomp was a running joke.”

Politically correct or not, reboot or not, The British Comedy Society is unveiling a blue plaque at Lynford Hall, near Thetford in Norfolk – where exteriors of Café René were filmed. The well-deserved, long-overdue plaque will be unveiled on 7 September 2019, which marks 35 years to the day since the first series debuted, following a successful pilot almost two years earlier which aired on December 30, 1982.
In: Comedy