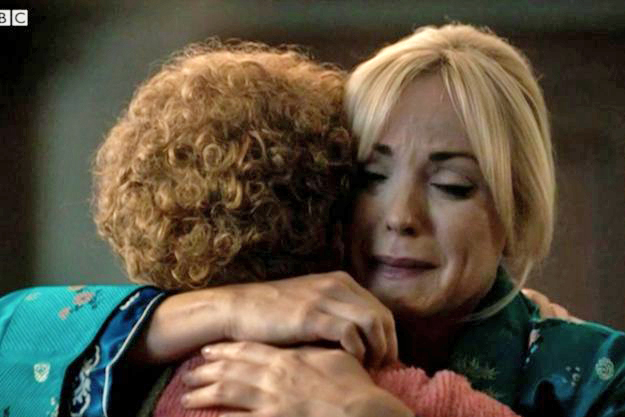 The holiday kick-off to Call the Midwife series 8 will see Nurse Trixie Franklin return to Poplar just in time to cover for the Sisters as they leave for the Mother House.

In the Christmas special, the Order’s Mother Superior has been taken ill and a new spiritual leader needs to be elected. In keeping with the drama quotient associated with CTM, it soon becomes clear, much to Sister Julienne’s horror, that she is the favored candidate to take over.

» The Call the Midwife holiday special will air Christmas Day on BBC 1 and PBS.

» Call the Midwife series 8 is tentatively set to premiere in January 2019 on BBC 1 and in early spring on PBS in America.

Long-time fans of Call the Midwife will no doubt remember Nurse Trixie Franklin’s dramatic departure in the middle of series 7 after slipping back into her addiction with booze. One has to wonder what took her so long after having to deal with the effects of her difficult decision to take three children away from their mother because of her Huntington’s Disease, and by her recent break-up with Christopher.

Following a bout with swigging vodka in the bathroom and skipping her support group meetings, Nurse Franklin reaches a breaking point and, thankfully, approaches Sister Julienne (Jenny Agutter) to say she needs help. The head Sister thanks her for her honesty, tells her to go away for six months of treatment and return to Nonnatus House when she has recovered.

Actress Helen George, who brilliantly portrays Nurse Franklin, was only taking a break for maternity leave, with show creator Heidi Thomas confirming that she will make her dramatic comeback in the forthcoming holiday episode.

Her mid-series departure last year came after producers ran out of creative ways to hide her real-life pregnancy aside from wearing baggy capes and carrying large objects directly in front of her.

• Welcome members of the ‘Call the Midwife’ Separation Anxiety Society

• ‘Call the Midwife’ set to return with new faces, new real world events and lots and lots of babies!

Speaking to Radio Times, George explained: “I was pregnant in the series, so you just kind of see me walk across the screen sometimes with odd fashions, or I’d sit down a lot, or I’m wearing lots of capes. It wasn’t a correct storyline to choose for the character, as well. It wasn’t right for Trixie to be pregnant. So we just did our best to cover it up.”

In addition to the welcome return of Nurse Franklin, this year’s holiday special will star Miriam Margoyles (Professor Sprout, Harry Potter) as Sister Mildred, who arrives unexpectedly at Nonnatus House, her hands full with four Chinese orphans. Having fled China, the child refugees were found abandoned in Hong Kong and are being adopted in the UK as part of the World Refugee Project.

As is usually the case at Nonnatus House this time of year, Christmas preparations are in full flow and the midwives, once again, find themselves busy caring for the expectant mothers of Poplar, while unexpected visitors spread equal parts joy and chaos to the holiday season.

Looking ahead to 2019, word on the street has series 8 — which is set in spring 1964 with London excited for the Queen’s Royal birth —  giving a nod to the recent buzz around Prince William and Kate Middleton’s arrival of a new royal baby.

Call the Midwife Holiday Special will air Christmas Day on BBC 1 and PBS.

This was me just over a year ago, gowned up and showing off my bump in Big Ben’s gaze. The day before we had been out walking the dog when I had the feeling of my blood literally boiling, and an itchiness all over my body even in my ears and in my eyes. I had scratched myself so much that my shellac nail varnish had chipped and I was black and blue from bruising. I knew that ICP ran in my family, I knew I had a 50/50 chance of having it during my pregnancy. Luckily I was able to call @icpsupport on a Sunday and the magnificence Jenny Chambers talked me through exactly what I should do, “go to the hospital NOW and get your bloods checked”. I tried to brush her off, we had a roast chicken in the oven which I REALLY wanted to eat first. But I went, she was right, and within 24 hours Wren was delivered. It wasn’t my “perfect birth” My nail varnish was chipped in all of the photos, my overnight bag was lacking in everything I needed, but Wren was safe, 3 weeks early. Without Jenny’s help our story may have been different. I would love to invite you to my afternoon tea that I’m hosting to raise money for this small, but vital charity. Tickets in bio 💜