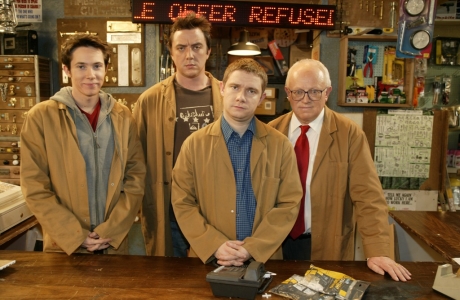 With four series of Sherlock in his rearview mirror, coupled with his stellar run as Bilbo Baggins in the Peter Jackson Hobbit trilogy, Martin Freeman’s stock would probably have the highest earnings ratio on the New York Stock Exchange if he were to go public any time soon. And we haven’t even mentioned his brilliant performance as Lester Nygard in the FX series Fargo.

Martin Freeman had a mega-successful comedy run as Tim in Ricky Gervais’ The Office, where a majority of America and the UK were introduced to Martin back in 2001. Based on that success, he landed a starring role in Hardware, a short-lived situation comedy set in Hamway’s Hardware Store in London, written by Simon Nye of Men Behaving Badly fame.

Consisting of only two series and 12 episodes, Hardware revolves around the staff of Hamway’s and their daily interaction with an endless number of DIY-obsessed but heavily challenged shoppers whom they consistently regard as time-wasters.

There are times where the staff of Hamway’s make Bernard Black of Black Books look like he should be up for Customer Service Agent of the Year.

Freeman plays Mike, the grumpy DIY fanatic who works in the shop. While his previous role as Tim in The Office had Freeman endlessly strive to make Gareth’s life miserable, the daily mission of his character on Hardware was to try, mostly unsuccessfully, to avoid getting sucked into the daily behind-the-counter “life chats.”

The series also starred Guardians of the Galaxy‘s Peter Serafinowicz, the English actor, composer, voice-over artist and director who, to me, will forever be remembered as Pete, the tidy flatmate of Shaun and Ed in Simon Pegg’s Shaun of the Dead. In real life, Serafinowicz is married to Sarah Alexander (Coupling, Jonathan Creek, Me and Mrs. Jones).

The series also features early Ryan Cartwright, known better in the U.S. for his more recent roles in Bones and Mad Men.

And from the Tellyspotting Book of Little Known Facts, to help you amaze your friends at any upcoming holiday parties: The show’s opening theme was A Taste of Honey by Herb Alpert’s Tijuana Brass.

Where Bill reaches back for a favorite, memorable clip or classic highlight. View more From the Vault.