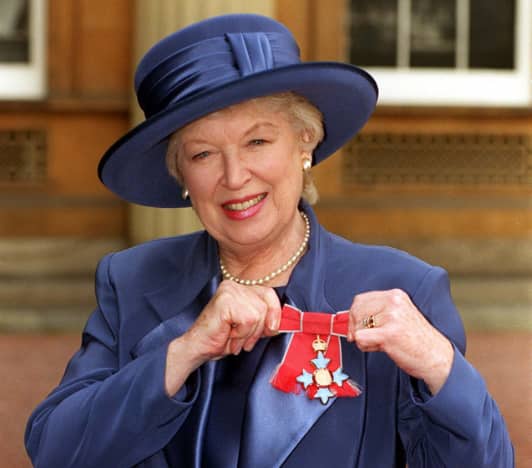 Actress June Whitfield after being made a CBE for services to comedy drama in 1998 (Photo: Fiona Hanson/PA Wire)

Sadly, these R.I.P. posts are becoming too much of a regular occurrence in recent weeks on Tellyspotting. The brilliant Dame June Whitfield quietly passed away Friday, December 28 at the age of 93.

Whitfield’s big break came in 1953 with the lead role in the BBC radio comedy Take It from Here. A number of television roles began to follow with the legendary Tony Hancock. It was 1968 when she began her long television partnership with Terry Scott, which peaked with roles as husband and wife in Happy Ever After (1974–78) and Terry and June (1979–87).

Whitfield was a regular fixture on TV and radio for six decades with starring roles or guest appearances in four Carry On films, Hancock’s Half Hour, Absolutely Fabulous, The Dick Emery Show, Last of the Summer Wine and The Green Green Grass. However, it was her 1992 appearance in Absolutely Fabulous playing Edina Monsoon’s mother that put her on top of the pop culture map for a new generation of British comedy fans.

In 1998, the London-born actress scored a guest role on Friends, America’s No. 1 comedy at the time, playing the housekeeper in the London-set episode, “The One with Ross’s Wedding, Part Two.

Her career wasn’t all comedy, however, having appeared in episodes of Midsomer Murders, Jonathan Creek, New Tricks and Doctor Who. She also played Agatha Christie’s Miss Marple on BBC Radio 4 between 1993 and 2001.

While tributes have poured in from fellow actors since her death on Friday, 28 December, no one said it better than AbFab producer and former Head of the BBC Comedy Entertainment, Jon Plowman, who told BBC Radio 5, “You would hand her a script, she would work out where the laughs were and then would very quietly wipe the floor with everybody else,” and also tweeting that “there was no-one with a better ability to just ‘place’ a line, always an act of utter precision.”

Thank you #damejunewhitfield, for teaching me my craft with such grace and dignity. I always wanted you to know how in awe of you I was, however, you were always far too humble to accept my https://t.co/2wc2G3bQ0G were a great source of inspiration to me. Bye-bye Gran. 🙏🏻💕

In 2017, Whitfield officially became a Dame Commander of the British Empire in the Queen’s Birthday Honors List at Buckingham Palace, receiving the honors from the Prince of Wales. It seems as though the Prince of Wales wasn’t the only fan of June Whitfield in the family. His mother, Queen Elizabeth II, once did an impression of Whitfield, mimicking the actress’ voice from the 1953 radio comedy “Take It From Here,” where it all began.