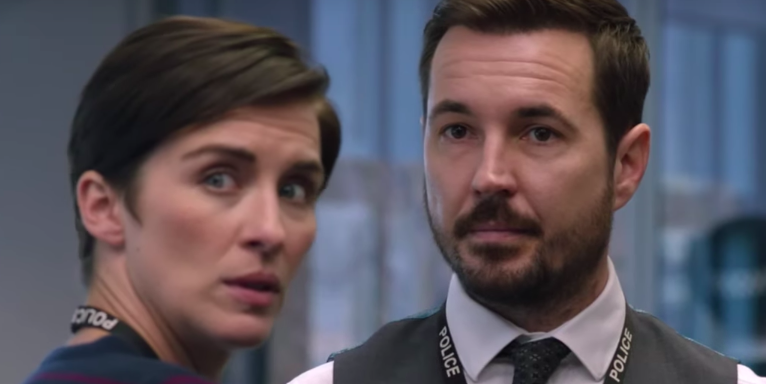 Actors in British series have greater cause to look over their shoulder than American TV actors. (Photo: BBC)

Line of Duty is, perhaps, the most intense hour of telly currently on telly.

As season 5 kicks off Sunday night on BBC One, early indications are that series creator/writer Jed Mercurio (Bodyguard) has pushed the gas pedal to the floor, going from zero to 60 in the first 90 seconds of episode 1.

As intense as the series is for long-time viewers, it can be equally intense for the actors — for entirely different reasons.

[Spoilers ahead about character deaths from the first four seasons of Line of Duty, along with a few from Spooks/MI5 and Bodyguard.]

The stars of Line of Duty recently revealed during a premiere screening and subsequent Q&A at the BFI in London just how nerve-racking it is to receive new scripts from Jed Mercurio for one main reason: They never know whether it will be their character’s turn to die.

“The first thing that you do is check that you’re not dead,” Adrian Dunbar (Superintendent Ted Hastings) told the audience.

Unfortunately, job security at AC-12 for Line of Duty actors is somewhat like being a kicker in American football. Key characters meeting fairly fiery deaths in earlier seasons include:

Unfortunately, this is becoming old hat for the great Keeley Hawes who seems to have perfected the unexpected series departure look after leaving Spooks, Line of Duty and, more recently, Bodyguard.

In addition to the above, these characters have all found themselves without work at different times during the series’ first 14 seasons:

This is where the actors’ panic begins to set in, long before filming begins.

Revealing what happened after he and McClure were sent the scripts for Line of Duty season 5, Compston said, “Vicky read it before me and she went, ‘Have you read episode 3 yet?’ I said I’d not read it, and she went, ‘Oooooh! Sent me into a panic,” he said. “I texted Jed, and he went, ‘Don’t panic, you’ll be alright.’

The concept of killing off a major character, generally unheard of in American television drama, is nothing new when it comes to quality British drama series such as Spooks, or even Downton Abbey. With Spooks (called MI5 in America), it got to a point over the 10 seasons that the series aired that, as a viewer, you felt like only Peter Firth was safe in his role as Sir Harry Pearce, Head of Counter-Terrorism Department (Section D), MI5.

For instance, over the course of 10 seasons fans of Spooks said goodbye to:

Even Downton Abbey, everyone’s favorite period drama, got into the game with the departures of Jessica Brown Findlay (Lady Sybil) and, of course, Dan Stevens (Matthew), who still has some fans in denial about his abrupt departure some 7+ years ago at the end of season 3.

So, as the UK tries to forget Brexit debate stress for just a tick, take comfort in knowing that the actors of your favorite British dramas, in many cases, feel your pain.

Line of Duty premieres Sunday, March 31, on BBC One.