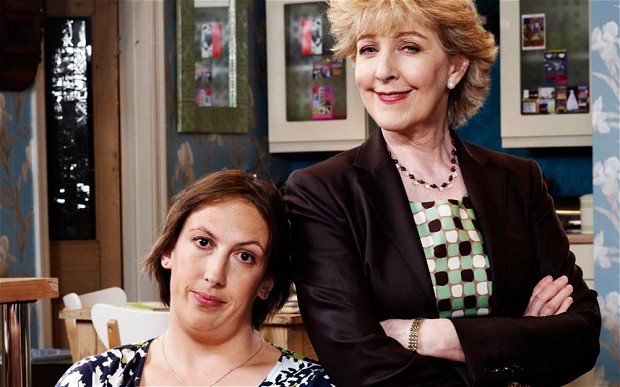 Aside from the writing and the acting, okay, and overall production, there is one additional thing that continues to set British drama and comedy apart from their American cousin’s output on a consistent basis.

Over the years, the Brits have placed an importance on developing radio drama and comedy, whether experimental or alternative, as a means of showcasing new talent, providing a venue for established talent and incubating new ideas that could, quite possibly, find its way to television. Shows like Hitchhiker’s Guide to the Galaxy, Little Britain, Goodness Gracious Me, The Mighty Boosh and Hancock’s Half Hour started out as radio programs before making the leap to telly.

BBC Radio 4, in particular, is the master of the spoken-word program, offering the best in news, drama, comedy, science and history on a daily basis.

The newest addition to the Radio 4 lineup already has a very nice television pedigree to pull from in the form of Steven Moffat/Mark Gatiss’ Sherlock: Mrs. Hudson’s Radio Show. The two-part series will star Patricia Hodge as Sherlock Holmes’ long-suffering yet unflappable landlady and housekeeper at 221B Baker Street.

Hodge starred in Rumpole of the Bailey and, more recently, as Miranda Hart‘s mother Penny, who’s single goal in life in Miranda was to find her constant disappointment of a daughter a husband and a proper job.

Mrs. Hudson’s Radio Show — produced by Barry Cryer and his son, Bob, and partly based on the elder Cryer’s 2012 book Mrs. Hudson’s Diaries — was recorded earlier this week in front of a live studio audience.

Speaking to the audience at RADA Studios prior to the taping, producers were understandably excited about what the audience was about to see: “There’ll be plenty of fireworks, as well as Music Hall singalongs, in this humorous and alternative take on Mrs Hudson’s life below stairs at 221 Baker Street. If nothing else, it proves that behind every great man there is an even greater woman … demanding rent.”

While it’s hard to imagine anyone but Una Stubbs in the role of Mrs. Hudson, the great Patricia Hodge will be, what I call, perfect in the role.

Aside from being the home to great British drama and comedy, Radio 4 is also home to the brilliant Desert Island Discs and the ever-popular Shipping Forecast, which celebrated its 150-year anniversary on the radio in August 2017. Next time you have a bit of free time in the evening or weekends, check out BBC Radio 4 and Radio 4 Extra for some really great old school radio.

• 16,016 clips made available for free download on BBC Sound Effects
• Original ‘Hitchhiker’s Guide to the Galaxy’ radio episodes going the vinyl route for the first time